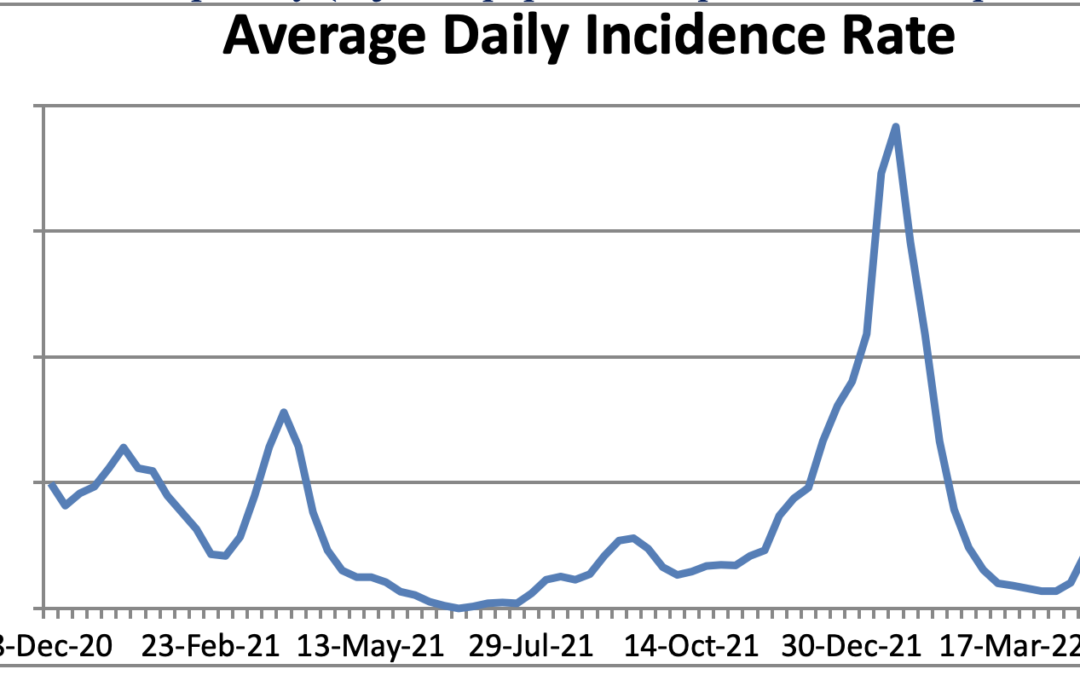 Incidence Rate in the Town of Barnstable

The incidence rate has increased in the Town of Barnstable to a fourteen day daily average of 17.3 new cases per day (adjusted population equivalent to 38.6 per 100,000).

The more contagious Omicron variant, BA.2, has been the most dominant version of COVID-19 in the United States   Scientists have identified twenty-one (21) viral offspring associated with BA.2.  The BA.2 variant is more transmissible but is less virulent.  It does not make people sicker than the earlier version of Omicron.  It often develops a scratchy throat, cough, and muscle pain.

As these variants continued to spread in recent weeks, cases and hospitalizations rose as well.  The 7-day average number of cases in the country has risen from about 25,000 in late March to more than 56,000 during the first week of May.

Cape Cod Healthcare reported on May 12th (yesterday) that there were a total of twenty-two (22) patients who were being treated for COVID-19 at Cape Cod and Falmouth hospitals.   Three (3) of the twenty-two patients were undergoing treatment in intensive care.

According to the Massachusetts Department of Public Health, on May 11th, 2022, there were at total of 728 patients hospitalized for COVID-19 in Massachusetts.  Of those 728 patients, 484 patients (66%) were reported to be fully vaccinated when they contracted COVID-19.

Deaths of Massachusetts Residents During the Past Week

There were sixteen (16) new, confirmed deaths of Massachusetts residents during the past week.  The average age of death was 78 years old.

Sixty-one (61%) of Barnstable County residents received booster doses after being fully vaccinated, compared to 56% of the Massachusetts population and  compared to 46% of the national population..